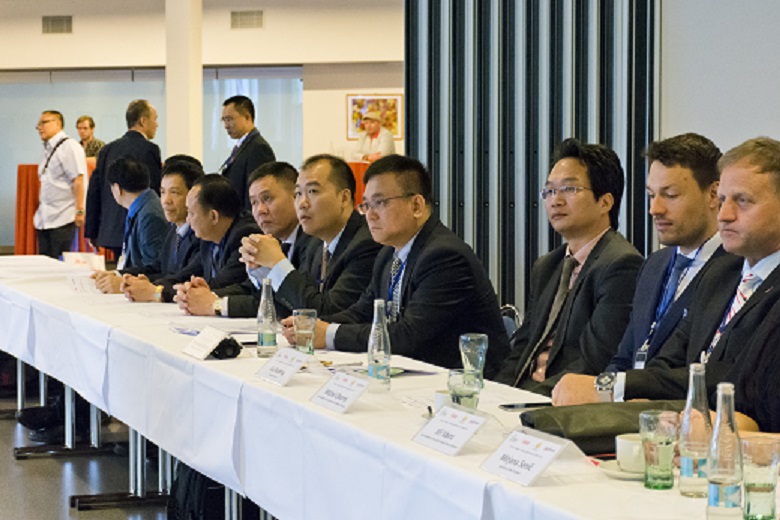 On July 10, 2017, the first year of Czech-Slovak-Chinese Investment and Trade Forum took place in Olomouc, under the patronage of the president of the Czech Republic Milos Zeman and the president of the Olomouc region Ladislav Oklestek. The forum was organised by our Chamber in cooperation with Chinese Fondesy Consulting company.

The Forum was attended by the representatives of the Czech-Slovak-Chinese Chamber (led by Roman Spáčil, president), Staturary City of Olomouc (governor  Antonín Staněk) and Olomouc Region (Pavel Šoltys, deputy of the president), and by political delegation from Yangjiang city from Guangdong province, represented by the director of the people’s congress of the Yangjiang city Mr. Chen Xiaoshan.

Our invitation was also accepted by the representative from the Office of the president of the Czech Republic (Radek Augustin, principal of the analytical office), Fondesy Consulting (Liu Xudong, CEO), Bank of China (Jan Kropík), Regional Chamber of Commerce in Olomouc (Vlastimil Navrátil, Radim Kašpar), Chamber of Commerce of Prague capital city (František Blažek) and many others.

Organization of this forum is a continuation of our warm relations with Guangdong Province, one of the economically strongest Chinese province, which both parties want to develop further.

„I am very glad for the opportunity to present our city of Yangjiang. We received interesting and important information relevant for our entrepreneurs, who are interested in working with Olomouc and Czech companies,“ said Chen Xiaoshan.

The Forum was and opportunity for Czech and Chinese companies that attended, to negotiate on specific possibilities for commercial cooperation.

„This Forum exceeded our expectations. Czech-Slovak-Chinese Chamber plans other similar semiraties and activities leading to cooperation between Czech and Chinese companies and to cultural and turistical approximation of both countries,“ said Roman Spáčil from the Chamber.

During complementary activities, the Chinese political delegation visited BEA campus in Olomouc of the Moravian University in Olomouc. Also, the governor of Olomouc city hosted the Chinese delegation at the town hall.